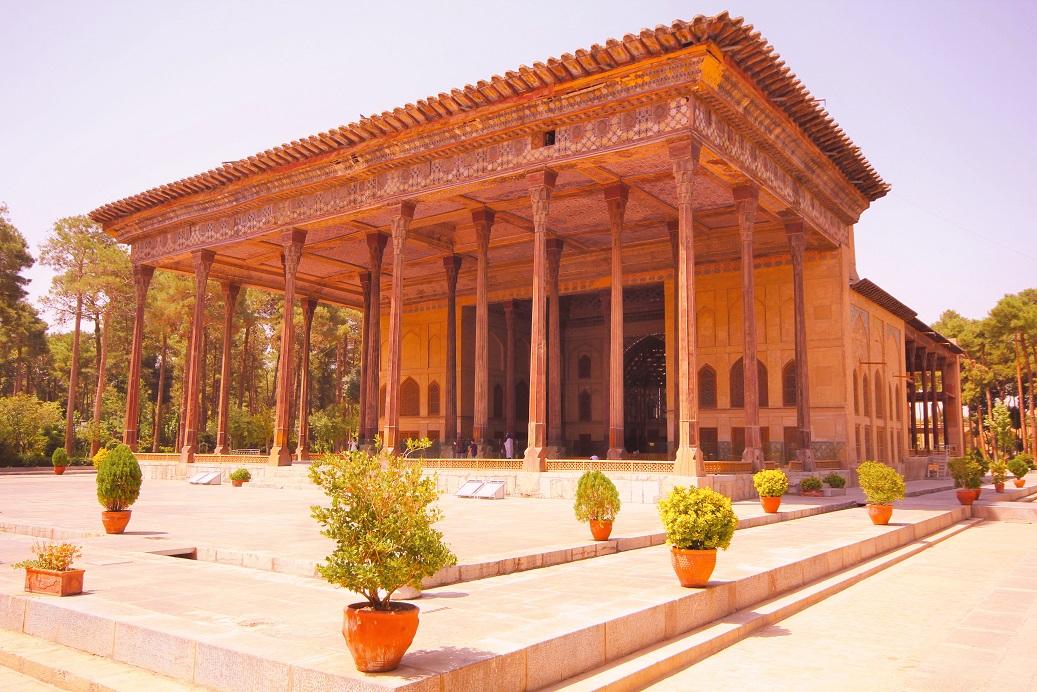 Chehel Sotoun Palace, localled called Kakh-e Chehel Sotoun is a veritable museum of Persian painting and ceramics. It was a pleasure pavilion used for the king`s entertainment`s and receptions.

It stands inside a vast royal park, but relatively near the enclosure, and was founded bv Shah Abbas I and it was named Divan Khaneh. It’s been translated into Seat of Govt. It was expanded by Shah Abbas II especially front view and porticos.

An inscription states that the decoration and frescoes were finished in 1647. Only two large historical frescoes date from the later period of the Zand dynasty. Unfortunately, the Chehel Sotun has been badly damaged at the end of this empire and later on, by several invaders especially, when the Afghans occupied the town and covered the paintings with a thick coat of whitewash. It is now being extensively restored under the aegis of the Institute Italiano Per il Medio Orient.

The pavilion opens onto the gardens by means of an elegant terrace, only a few steps high and supported by slender, delicate wooden pillars. In reality, there were never more than twenty columns, but they were reflected in the pool in the park, and so the Persian liked to call the building the (pavilion with forty columns) (besides, the number 40 had a symbolic meaning in Persia and expressed respect and admiration). Two rows of waterspouts and fountains in the shape of stone lions at the four corners carried water to the huge, elegant rectangular basin.

The terrace is a marvel of elegance. The slender pillars support a light wooden ceiling with wide fretwork louvers. Here we should note the influence of Eastern Asian architecture. Part of the sumptuous decoration has disappeared. We must picture the back wall covered with mirrors, the doors of rare carved wood, and the pillars, each cut from a single lane-tree trunk, with their fine eneer, their brightly colored paintings, their mirrors and studs of colored glass. We still have the remarkable ceiling its beams, its covering, its painted wood louvers, and its carefully lay-work-rosettes and suns, stars, stylized fruit and foliage. The great wooden ceilings-a rare luxury in a country so acking in trees-are among guarded by four lions which support the central columns.

The palace is called Chehel Sotun because of the number of the columns of this monument. Each column is formed of a plain tree on the skin of which a thin layer of colored board has been fitted. This layer was formerly covered with colored pieces of glass and mirror.
All the walls used to be decorated with large mirrors and colored peices of glass and beautiful paintings. Inlaid work was a characteristic of all doors and windows. The pool in front of the building is 110 meters long and 16 meters wide. Four stone lions have been placed on the four sides of a pond in the center of the hall from whose open mouths water streams down.

Finally, the unique ceiling of the 18 columned portico and the mirror work on the ceiling of the hall, are eye catching. The paintings demonstrating the parties held by Shah Abbas the great, and reception of Mohammad Vali Khan, the king of Turkistan, the war between Shah Ismail the first and the Ottoman forces in Chaldoran county, the reception party in honor of Homayun the king of India and in the eastern section, in front of the painting scene of Shah Abbas` war with the Uzbeks, is seen the war waged by Nader Shah of Afshar dynasty against the Hindus in Kornal.

As Travel consultants we would highly recommend visiting this garden museum by taking one of our guided tours in order to get acquainted with history and culture.