🕒 3 minute read
This trip is highly recommended to those travelers who are interested in knowing about Persian history aside from meeting people. We will endeavor introducing the most of Iran’s World Heritage sites such as Persepolis of Shiraz, Naqsh-e Jahan Sq of Esfahan, as well as Takht-e Soleyman of Tekab.

Day 2: Zahedan
Having a day trip to Shahr-e Soukhte that is the oldest ancient city of Iran which dates back to 7000 years ago.

Day 3: Zahedan/Mahan
In morning visit Kouh Khaje that is one of the most popular sites of Iran from Sassanid. Afternoon drive to Mahan.

Day 4: Bam
In the morning visit Mahan and its marvelous Prince Garden which is also known as the largest Persian garden. In the afternoon take an excursion to Bam, that is one of Iran’s world heritage sites which dates back to over than 2000 years ago.

Day 5: Kerman
Take a day trip toward Kaluts that is known as the hottest spot on earth. Having an expedition among rocks and sand dunes would be preferable to feel the heat in this region.

Day 6: Meymand
Today’s plan is drive to Meymand that is a troglodyte village of Iran which dates back to 7000 years ago and is one of the most popular places to visit Iran. It could be a unique experience to stay in such a cave houses. Visiting village and its surrounding is our aim to get a wonder.

Day 8: Shiraz
Drive to Shiraz, the city of poetry and gardening. En route visit Pasargadae where is one of heritage list of Iran that refers to Persian Empire where Cyrus the great had founded his empire and also as his burial place.

Day 9: Shiraz
Having Shiraz garden tour not only help you to enjoy more of the city but it would also give you opportunity how people are charming and calm. Visit Naranjestan garden, Eram garden, Afif Afif Abad garden and Delgosha garden.

Day 10: Shiraz
In the morning visit Nasir al molk mosque which is known as pink house, Karim khan fortress, vakil bazaar. Enjoy free afternoon to explore the beautiful city of Iran by your own.

Day 11: Persepolis
Have a day trip to Persepolis where it was the former capital of Persian empire which dates back to 517 BC. Enjoy walking through ruins of Persepolis and being exposed to bas reliefs of palaces.

Day 12: Yazd
Enjoy visiting mud brick city of Yazd that is listed relatively recently as a world heritage site. Walking in old district might be interesting.

Day 13: Yazd
one of the most visited cities of Iran is Yazd that is resided Iranian Zoroastrians. Visit Towers of Silence as the cemetery of Zoroastrians, Fire temple, Water museum and Friday mosque.

Day 14: Esfahan
Drive in few hours toward one of the most beautiful cities of Iran. Enjoy visiting Naqsh-e Jahan square as a world heritage including Aali Qapu palace, Sheikh Lotf allah mosque and Royal mosque.

Day 16: Kashan
A short drive toward Kashan, the pearl of desert. Visiting Fin garden which is a piece of ancient Persian garden would be our purpose of visiting this city in addition to old mansions of Tabatabaee & Boroujerdi.

Day 17: Hamedan
Drive toward Hamedan, where it dates back to 2800 years ago and is one of the most beautiful cities of Iran. The purpose of visiting such a being informed about one of the main Iranian doctors and scientist who was Avicenna in addition to other poets and places. However there is no world heritage site and we would avoid long drives.

Day 18: Kermanshah
A beautiful drive toward a Kurdish zone of Iran that has the most hospitable people of the earth. Enjoy visiting Bistoun as the world heritage site which a complex of arts and reliefs from all ancient dynasties of Iran but what plays an important role in history of this area is relief of Darius I who unified again all great Persia. In the city you would visit Tekiyeh Moaven al molk as the ceremonial place which is very well known for its tile working.

Day 19: Kermanshah
Having a day trip to Qasr-e- Shirin that is one of the ancient cities on Silk Road which dates back to 220 AD. Visit Palaces of King Khosro and Anooshiravan. In the afternoon visit Taq-e Bostan.

Day 20: Tekab
There is no doubt that one of the most impressive sites of Iran is Takht-e Soleyman as a world heritage site which dates back to 220 AD and has been built on a volcano. It has been a fire temple to pay respect to their prophet and there were as many palaces for ceremonies as it used to be.

Day 21: Zanjan
a nice long drive through valleys and passes of Sahand mountain that is 2nd highest mountain in western Iran. Visit Soltanieh dome as the world heritage site which dates back to 14th century as the 3rd largest mud-brick dome of the world.

Day 25: Anzali
morning city tour of Ardabil including Skhekh Safi mausoleum which is the last stop for visiting World Heritage sites. Afternoon drive to Anzali where people would be celebrating the amazing trip around Iran.

Day 27: Departure
Travelers would leave the country with sweet memories. 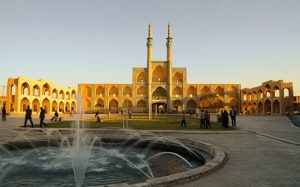