Takab (locally called Tekab), is a tiny city in north west of Iran that has been called previously Shiz. Nowadays many people remind the name of the because of being close to one of the most well known as temples of Iran, Takht-e Soleyman.

Tekab citizens mostly speak in Azeri language because of being in one of Iranian-Azeri provinces. However, the rest of country call them Kurds. Today Tekab hosts several domestic and foreign tourists from all over the world because of visiting Takht-e Soleyman.

It’s been one of the outstanding monuments from ancient Persia that has been preserved from several invasions over the history. It’s very much depends on season and traveling route whether people prefer staying overnight in this city or not.

Those who travel from Tabriz or Urmia, should stay overnight as it can be long day, however, others who travel vise versa can choose whether to stay here to keep going to Zanjan via Sahand road.

People are of the opinion that name of the city comes from Persian Empire as their holy prophet was born here and he founded Azargoshnasb temple. It’s well noted Persians were struggling to preserve the city during Arab’s invasions and they changed the name of it into Takht-e Soleyman as it has been a holy person for Muslims too.

Hotels:
although it is located far from other touristy route, there is a decent hotel in this city for budget-mid range passengers. However, relatively recently, another hostel was opened next to the temple for those who are willing to visit this site for sun rise.

Foods;
Having fresh foods is always important for people of Iran especially this region. They would all love having kebab with fresh meat for every meal.

Things to do:
Walking randomly along alleys and streets will be very exciting, as you can simply interact with locals who are well dressed in Kurdi costume.

As travel consultants, we would highly recommend visiting this city and its ancient sites for your second trip to Iran, however, it is possible to visit it in a 2-week holiday by having  an slightly tight schedule. 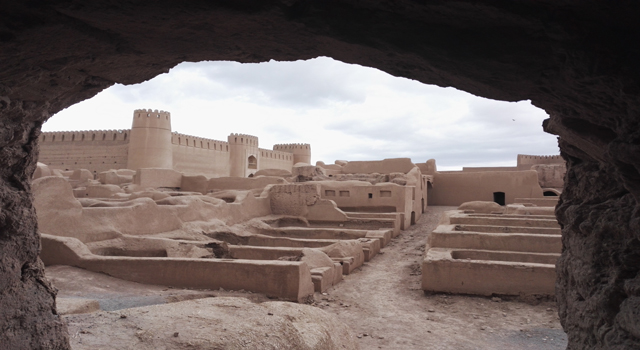 Rayen citadel is one of the oldest adobe castles of Kerman province which dates back to Sassanid, however, there are some evidence that this castle is even older than that.

This castle is approximately 20,000 square meters which consists royal department, military department, houses of ordinary people. Many archaeologists are of the opinion that there are several layers of civilizations underneath and they preferred not to excavate this.

Rayen castle has been always an important hub on silk route and it should be well protected for safety and security. This is the reason there are several towers in each corner facing to different directions and cities. There is only one gate to enter which is located in eastern face of the castle over the huge moat.

Upon arrival, there is a huge lobby for people in order to get permitted to go through the city which is just located aside from bazaar. House of the governor has been located in the western side of the city and it’s well protected by watching towers and his army. This mansion consists four different houses because of their privacy.

Many people had been living in this castle on left hand side of the governor mansion and they had their own constructions such as houses, temples, stables, markets, etc. On right hand side of royal property, military base has been located with their own monuments and infrastructures. It’ well noted that castle has been used on 146 years ago that a huge earth quake destroyed.

It’ been renovated by archaeologists of Iran and other countries over in 1960s but after Iranian revolution it has been just preserved. Many people were interested in visiting this castle from 2003 that Bam citadel was gone by an enormous earth quake.

As travel consultants, we would highly recommend visiting this castle while you stay in this province especially in Rayen and simply you can visit other natural and historical attractions of this city.